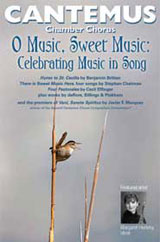 In Webster’s Ninth New Collegiate Dictionary, music is first shown as being from a Greek word for “any art presided over by the Muses, especially music.” The main definition of the English word is “the science or art of ordering tones or sounds in succession, in combination, and in temporal relationships to produce a composition having unity and continuity.”

To all of you, and to us in Cantemus, music is undoubtedly much more than that. If asked to define music, what would you say? Does music have meaning for you? Do you associate events in your life with particular types of music, or even specific songs? Do you experience music as an emotional component of your daily life? Are you intrigued by the craft of musical composition and the artistry of musical performers? Regardless of your perspective, sit back and celebrate this joyful muse and ancient art with us!

The centerpiece of our program is the beautiful “Hymn to St. Cecilia” composed by Benjamin Britten. This setting of a text by W. H. Auden is held in high regard and universally viewed as a significant gem for unaccompanied chorus. Composers through the generations have composed “hymns” to St. Cecilia, a woman executed in the early centuries A.D. for being a Christian. Pope Paschal I, in 817, had her remains reburied while also providing an endowment for the monks of the monastery next to St. Cecilia’s church; this endowment directed the monks to sing, without ceasing, at her tomb. This led to her adoption as the patron saint of music and musicians (Rodney Castleden, “The Book of Saints,” Quercus Publishing). I encourage you to listen to the beautiful harmonies, the clarity of the vocal writing for each section, and the ever-present sense of adoration and mystery.

Guest artist Margaret Herlehy, oboist, will join us for two compositions for chorus and oboe. Together, Cantemus and Margaret will revisit Cecil Effinger’s “Four Pastorales” which we first performed together in 2005. This is a set of works set to the poetry of Thomas Hornsby Ferrill, Poet Laureate of Colorado during the 1980’s. Ferrill’s words evoke four choral landscapes by Effinger: the starkness of a fighter pilot’s mission; the arid, deserted sun-bleached prairie; the olfactory and memory; leaving, loss, and the beauty beyond.

Stephen Chatman’s “There is Sweet Music Here,” also for chorus and oboe, aligns with our “celebration of music” theme. Chatman was commissioned to write these works in 1984, and his notes for this set include these comments: “This set of four songs to verses by three English Poets shows the marked influence of the English choral tradition. Its two joyous settings of poems from Blake’s ‘Songs of Innocence’ are coupled with gentler, more inward songs to poems of Tennyson and Shelley” (quoted from the choral score).

The fourth foundation for this concert is the beautifully evocative “Veni, Sancte Spiritus” (Come, Holy Spirit) by Javier F. Marquez. Composed in January 2008, this work was the winner of the music composition competition sponsored by Cantemus during its yearlong 25th Anniversary Year 2007-2008. Mr. Marquez, a recent graduate of Salem State College, summarizes his work as follows: “In the present work, the thirteenth-century sequence Veni, Sancte Spiritus has been set to music as five short prayers and a closing Alleluia. The harmonic language attempts to demonstrate the varying degrees of tension and release that can be produced with a single scale, in this case the D major scale.”

There are other facets of music that you will hear as we spin and celebrate this Muse. The 16th century Netherlands composer, Cipriano deRore, composed a beautiful madrigal that begins “celestial music with her sweet harmonious sounds.” A 16th century work by English composer Francis Pilkington, “Music, Dear Solace,” draws our attention to another important archetype for music, the Greek god Apollo. You will hear the playful music-making of “Modern Music” by the early American singing master William Billings; and several rounds / canons that sing music’s praise, highlighted by Daniel Pinkham’s “Canon for St. Cecilia’s Day.”

As you re-read the notes above, notice how the two definitions of music, presented at the beginning, are constantly present—music as a creative gift of the Muse, and music as a compositional quest, a problem to be “solved.” Music meets us as intellect and emotion, provoking and enriching our human condition in multiple ways. Music, so much more than aphrodisiac or amphetamine, so much greater than mere backdrop for human emotion, is everything that we are, and usually it is more.