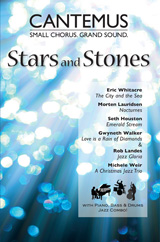 “When we think of a multitude, we think of the stars in the firmament,
we think of the grains of sand on the beach;
we should also be thinking of the stones on the Camino.
For every star in the Milky Way, there’s a stone on the pathway of the Camino;
each a reflected soul mate, an echo of the cosmos.”
— from The Way of Stars and Stones: Thoughts on a Pilgrimage by Wilna Wilkinson

A title inspired by those sparklers of both the heavens and the earth: stars and stones. Heads in the clouds; feet on the ground. A universe in balance. “Each a reflected soul mate, an echo in the cosmos.” Dazzling stars are the obvious choice — the jewels of a black winter sky, if you will — and can be found in Lauridsen’s stunning setting of James Agee’s poem “Sure on This Shining Night.” (Sure on this shining night/I weep for wonder/Wand’ring far alone/Of shadows on the stars.) And stones — the jewels of a frozen earth. These natural gems can be found in a number of pieces on the program. You will hear us sing of emeralds, of pearls, of smooth stones, of diamonds. (“Love is a rain of diamonds in the mind/a fruit of the soul sliced in two.”)

Morten Lauridsen (b. 1943) is a longtime professor in the Composition Department at the University of Southern California School of Music and composer-in-residence for the Los Angeles Master Chorale. One of America’s most-performed contemporary choral composers of sacred and secular music, he was the recipient of the National Medal of Arts in 2007.

Lauridsen’s musical language is influenced heavily by Gregorian Chant and extended harmony and idiosyncratic voicing (lots of second-inversion chords and delayed cadences). The American Musicologist Nick Strimple describes Lauridsen as “the only American composer in history who can be called a mystic, (whose) probing, serene work contains an elusive and indefinable ingredient which leaves the impression that all the questions have been answered.”

Composed in 2005, the original three movements of Nocturnes were conceived as an integrated choral cycle, while also allowing for the separate performance of each movement, made possible by their structural completeness. You will hear two movements of the work, “Sa nuit d'été” and “Sure on This Shining Night” — both of which use poetry from twentieth-century poets: the German Rainer Maria Rilke (written in French) and the American James Agee. The final epilogue “Voici le soir” was composed in 2008 to a text by Rilke, and provides a unifying conclusion to the work.

Eric Whitacre’s The City and the Sea gives us beautiful poetic references to stranded stars, sea shells, the rain’s pearls and smooth round stones. American-born Whitacre (b. 1970) has become famous worldwide as one of the brightest stars in choral music in the world today. His music displays stunning colors, brilliant text painting, harmonic complexity, and skillful compositional road maps that are all unique to his work.

Whitacre is probably best known for his choral works; however, both his choral and instrumental styles use his signature "Whitacre chords." These are often seventh or ninth chords, with or without suspended seconds and fourths, most famously a root-position major triad with an added major second and/or perfect fourth – not unlike Lauridsen. Whitacre is also known for his use of unconventional chord progressions, mixed, complex, and/or compound meters, including frequent meter changes and unusual rhythmic patterns.

The City and the Sea is a set of five settings on poems by E.E. Cummings. We offer you three from the set: “the moon is hiding in her hair,” “maggie and milly and molly and may,” and finally “as is the sea marvelous.” In his own words, Whitacre tells us that “the entire set is based on white key clusters in the piano. I’ve started calling this the ‘oven-mitt’ technique, because the chords are played as if you are wearing mitts on your hands – the four fingers all bunched together and the thumb on its own. Occasionally I break up the clusters and write the chords as arpeggios, as in maggie and milly and molly and may."

“Love is a Rain of Diamonds” features poetry by May Swenson and is one of six poems set to music by New England composer Gwyneth Walker (b. 1947) in her choral cycle Songs for Women’s Voices. Walker states in her own program notes that the six poems address a variety of topics such as God, romance, and death, “yet they speak with one voice, one style, and one life-affirming philosophy.” The colors Walker creates are varied, rich, and creative, always supporting the vocal presentation and never overpowering the singers. With weaving of piano and voices, “Love is a Rain of Diamonds” is cleverly scored to sound like light fractioning off of diamonds.

Los Angeles composer Seth Houston (b. 1974) composed “Emerald Stream” on his seventeenth birthday while paddling a canoe on a month-long canoe trip in northern Canada. The piece draws inspiration from the “shape-note” singing tradition that flourished in New England from 1780 to 1820. Like a shape-note “fuging” tune, “Emerald Stream” features a hearty, strong sound, an imitative fuging section, melodic ornaments, open intervals and doubling at the octave. It is unusual, however, in that the melody is in the bass part. While drawing on the hymn-writing style of Isaac Watts and Charles Wesley, “Emerald Stream” proclaims a more contemporary message of environmental stewardship.

Finally I have programmed some straightforward jazz pieces for this sparkling program. Michele Weir is one of the leading figures in vocal jazz today. She has earned international recognition through a diverse set of talents as arranger, teacher, singer and pianist. We offer A Christmas Jazz Trio, a set of three very popular carols (“Santa Claus is Comin’ to Town,” “O Christmas Tree,” and “Winter Wonderland”). The pieces are fun and tight, with clean close harmonies and rich sonorities. And I round out the program with Rob Landes’ Jazz Gloria, scored for chorus and jazz trio (piano, bass and drums).

A native Houstonian, Landes is widely known as a pianist, organist, harpist, arranger, conductor and published composer. Landes’ playing has taken him from the United States and Canada, to Norway and many parts of Europe. We are thrilled that three renowned jazz players are performing with us this evening: Joe Mulholland, pianist; Bruno Raberg, bassist; Jon Hazilla, drummer. You will hear Landes’ clever treatment of the traditional Mass text, now swinging and swaying with familiar, exciting and downright beautiful jazz settings. “Glory to God in the Highest and peace to his people on earth.” The ancient praise text has never sounded quite so cool.

As always, I look forward to seeing you at the concert. The holidays are upon us, and I am grateful for your continued support of Cantemus!