On the Waterfront: Songs of the Sea 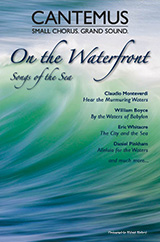 WHERE MANY RIVERS MEET
All the water below me came from above.
All the clouds living in the mountains
gave it to the rivers,
who gave it to the sea, which was their dying.

And so I float on cloud become water,
central sea surrounded by white mountains,
the water salt, once fresh,
cloud fall and stream rush, tree roots and tide bank,
leading to the rivers’ mouths
and the mouths of the rivers sing into the sea,
the stories buried in the mountains
give out into the sea
and the sea remembers
and sings back,
from the depths,
where nothing is forgotten.
–David Whyte

On the Waterfront: Songs of the Sea is a love song to the wild beauty of the North Shore. Current and undercurrent, ocean and river, stream and eddy – the North Shore is a treasure trove of gorgeous waterways. An aquatic frontier of motion, flow and sweep.

The program is diverse, much like the shoreline, at times warm, inviting and accessible, at other times sharp, mysterious and rocky. Daniel Pinkham’s Alleluia for the Waters, at the center of the program, represents a bit of both (with a clear edge to the rocky shores), five movements that reference Biblical waters, from Creation to Noah and from Moses to baptism, ending with an exultation of “alleluias” for the waters. Pinkham’s waters are a bit rough, you might call it a “baptismal immersion,” ultimately jubilant and celebratory.

American-born Eric Whitacre (b. 1970) has become famous worldwide as one of the brightest stars in choral music today. His music displays stunning colors, brilliant text painting, harmonic complexity, and skillful compositional road maps that are all unique to his work. The City and the Sea is a set of five settings on poems by E.E. Cummings. We offer you three from the set, the “Sea” movements: “the moon is hiding in her hair,” “maggie and milly and molly and may,” and finally “as is the sea marvelous.” In his own words, Whitacre tells us that “the entire set is based on white key clusters in the piano. I’ve started calling this the ‘oven-mitt’ technique, because the chords are played as if you are wearing mitts on your hands – the four fingers all bunched together and the thumb on its own.”

From the canon, I have chosen two significant pieces, marked by lush harmonies and contrasting period styles: Monteverdi’s secular madrigal “Ecco mormorar l’onde” (“Hear the murmuring waters”) and William Boyce’s sacred motet “By the Waters of Babylon.” Monteverdi published his setting of Torquato Tasso's poem in 1590 in his “Second Book of Madrigals.” This mature composition is over-boiling with imagery, showcasing Monteverdi's true individuality and genius. Every line, set apart by a clear, mildly punctuating cadence, is set with a compact, picturesque musical flight of fancy, directly triggered by one of Tasso's concrete images: murmuring waves, trembling leaves, gently singing birds and a joyful dawn. Boyce’s motet, by turn, is a mournful and poignant setting of Psalm 137’s first eight verses, brimming with pathos and yearning. The leading native-born composer of eighteenth-century England, William Boyce was born in London in 1711. After receiving his primary musical training at St. Paul’s Cathedral, he went on to study organ, becoming one of England’s star players. In 1749, Boyce accepted employment as organist at the All Hallows Church, but also began a relationship with the Drury Lane Theater; he composed a wealth of incidental music over the next three years for that establishment. When, in 1755, the flourishing musician's former teacher Maurice Greene died, Boyce assumed the position “Master of the King’s Music,” an appointment widely considered the apex of his artistic career.

For calmer and more welcoming waters, I have added a number of folk songs and spirituals to the program. “Shenandoah” is a favorite of the Cantemus roster, and it is my pleasure to bring the piece to life with this lovely group. “Away from the Roll of the Sea” and “Song for the Mira” are two of Canada’s most endearing folksongs – both beloved for their soaring melodies and their deep connection to treasured Canadian waterways. Associated with the songs of the Underground Railway, “Wade in the Water” is a well-known, well-loved spiritual that relates to both the Old and New Testaments. The verses reflect the Israelites’ escape out of Egypt as found in Exodus and the chorus refers to healing (John 5): “For an angel went down at a certain season into the pool, and troubled the water: whosoever then first after the troubling of the water stepped in was made whole of whatsoever disease he had.” While it is hard to pinpoint the exact origins of the song, “Down to the River to Pray” has been referred to as a hymn, a spiritual and an Appalachian song. Some believe it was a Native American Tribal song that was adapted to include Christian lyrics. It is attributed to the editor, George H. Allan, in the Slave Songbook of 1867, and Alison Krauss popularized it in the 2000 film O Brother, Where Art Thou? Whatever its mysterious origins, the song is all at once wistful, stirring and moving. And finally, “Cloudburst,” made famous by the glorious Lambert, Hendricks & Ross in 1960, hydrates our program with a classic jazz toe tapper – fleet, quick, funny and ultimately true bebop, including a familiar quotation from “Shave and a Haircut” bookending the piece.

“…and the mouths of the rivers sing into the sea, the stories buried in the mountains give out into the sea and the sea remembers and sings back, from the depths, where nothing is forgotten.” The history of vocal music is rich with images of the seas, rivers, inlets, and tides, reminders of our natural inheritance, and it is our pleasure to swim in the diverse waters of anthem, madrigal, motet, folksong and spiritual. As always, I look forward to seeing you at the reception and thank you for your continued support of Cantemus Chamber Chorus.